Today the Republic of Tajikistan is a mountainous country with absolute altitudes from 300 to 7495 meters. 93% of the country’s territory are mountain ranges related to the Pamir, Gissar-Alai and Tien-Shan mountain systems. These ridges are divided by rich and fertile lands of Fergana, Zerafshan, Vakhsh and Gissar valleys. The complexity of the terrain and the large amplitude of the altitudes of mountain systems cause an exceptional diversity of flora and fauna. ERAL INFORMATION ABOUT THE REPUBLIC OF TAJIKISTAN. Location: south-east of Central Asia. It borders in the east with China, in the west and north - with Uzbekistan, in the north - with Kyrgyzstan, in the south - with Afghanistan. Territory: 142.6 thousand square kilometers Climate: distinctly continental - in January the temperature is from -20° C to 0° C; and in June from 0° C to + 30° C, depending on the altitude. Population: 8.7 million people (as of January 1st, 2017) Capital: Dushanbe city Administrative division: Gorno-Badakhshan Autonomous Oblast, Sughd Province, Khatlon Region, Regions of Republican Subordination. Language: Tajik (state), Russian (the language of interethnic communication) Currency: Tajik Somoni 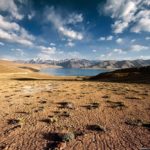 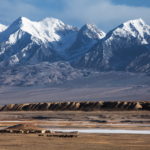